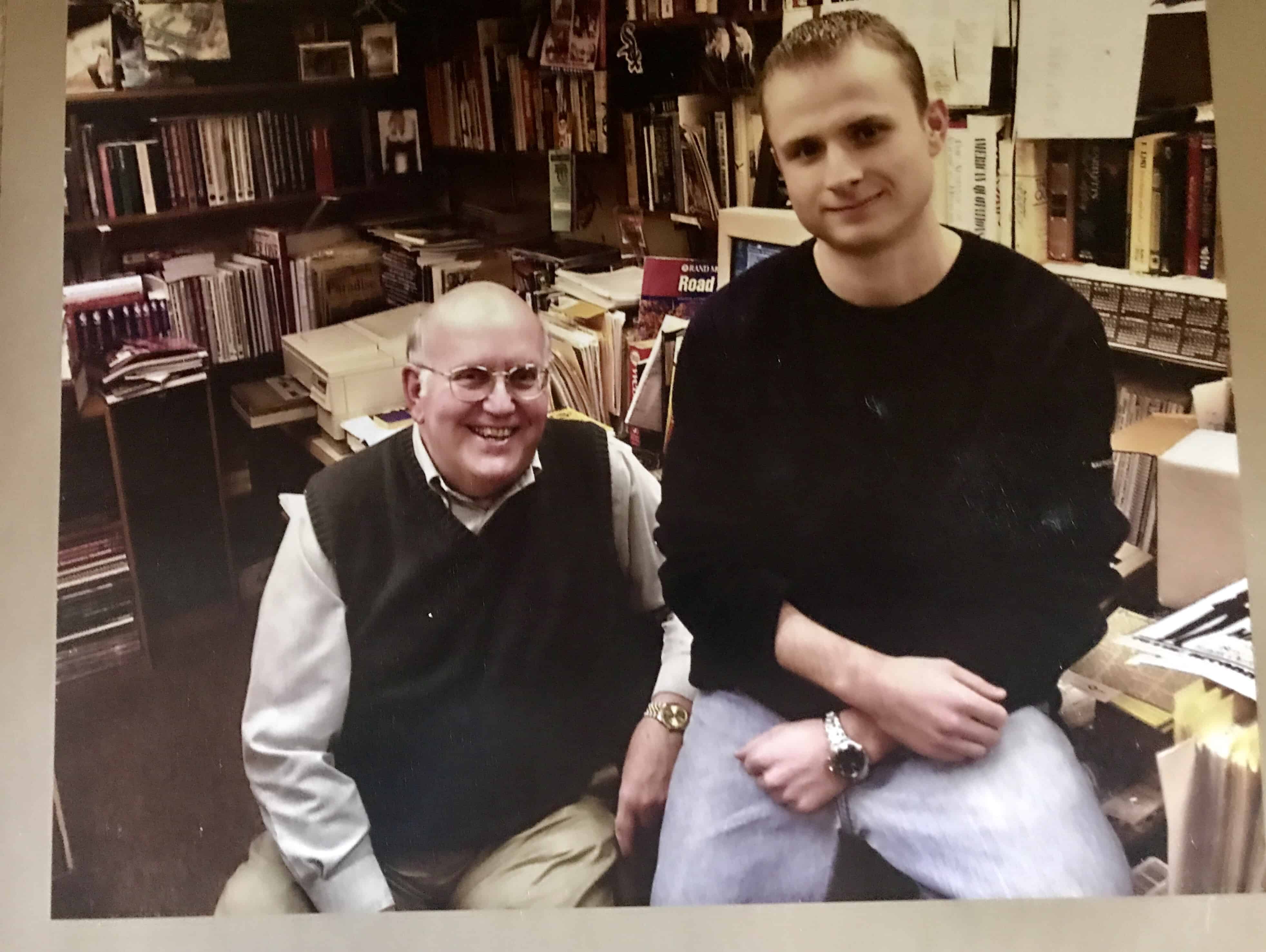 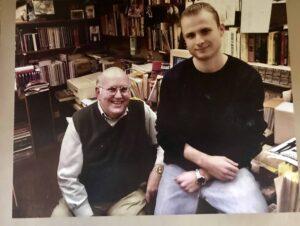 I had the special privilege of introducing Bob Hammel at a library dedication in his honor last night, which gave me the chance to reflect on a lot of history as I approach the release of my 13th book – none of which would have happened without Bob’s generosity and teaching. My first book, Tonight I Said Goodbye, was dedicated to him, but they all should be, really. When people ask “How do you get published?” I really have no answer other than “Meet Bob Hammel.” For me, that’s about how it worked.  The picture above was taken in Bob’s newspaper office when I was 20 and had just received my first publishing contract. About, oh, two or three decades earlier than it might have happened without him.

I began to work with Bob shortly after he’d retired as sports editor of the Bloomington Herald-Times. My neighbor, Michael Hefron, (like Bob, a mentor and friend) was the newspaper’s general manager. Mike knew I wanted to be a writer. Mike is the type of person who prefers seeing effort to hearing goals, and so he encouraged me to meet with Bob to talk about writing, if indeed I was serious about the endeavor. I might have made a mistake right then. I might have said something along the lines of, “But I don’t want to be a sports writer; I want to write novels.” As I recall, the air around us turned a little blue, and I was left with the firm – and accurate – understanding that good writing was good writing, and I’d better figure that out real fast.

And so I found myself in Bob’s basement lair at the Herald-Times, a room with which he took some issues from time to time due to a few leaky pipes and the tendency for people to turn the lights out when he was still in his office, but a room that was immediately appealing to me, and now remains in mind as an all-time cherished spot. So many books! Shelves and shelves of books, from sports to politics to the writer’s art. I loved that room. Until the day I helped him move out of it. Then his decision to archive approximately forty years of Swimming World magazine seemed a lot less impressive.

By the time I left that first meeting, two things had become crystal clear:

When I returned for our next session, I received the first of what Bob called, somehow with a straight face, “a little bit of editing” to my story. There was so much red ink on the pages I thought he’d surely nicked an artery with his letter-opener.  When I’d dropped off the story, I’d placed a thank-you note on top, and I now observed, with an uneasy sense of what was to come, that Bob had edited even that. Bob doesn’t remember doing this, but I have the evidence to prove it, because that initial edit and lesson in writing meant so much to me that I saved the story – and the thank-you note. Red ink on all of it.

He walked me through the massacre like an evidence technician recreating a crime scene, explaining what each blood splatter meant, how so many of the blood splatters shared fundamental root causes, how the blood splatters built upon one another to create a real mess, and how adherence to some basic principles could avert such bloodshed in the future.

Then he told me he thought it was a very good piece of work.

It was a bewildering summation considering he’d found only a few pronouns that didn’t demand a swift strike of the red pen.

Bob doesn’t like to hear it, but I think his willingness to teach his craft, to share the lessons of Strunk & White and William Zinsser and others, gave me an incredible head start on my life’s dream of becoming a novelist. That’s the how it happened of my career.