Wondering how Michael spent his summer? He sits down with the Portland Press Herald and talks about his influences, his summer in Maine, and his research for the book following Rise the Dark. Read the full Q&A below or check it out here:

He talks about his influences, including Stephen King, while living near Camden and researching his next book. 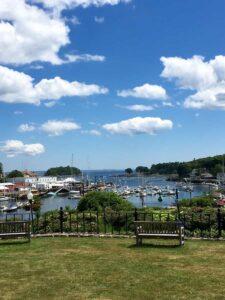 As visitors flock to Maine for summer vacation, Michael Koryta is here to work. The 33-year-old Indiana native has rented a place near Camden, where he’s researching his next book. The critically acclaimed bestselling author of 11 thrillers and suspense novels, Koryta (rhymes with “margarita”) wants to experience Maine in a way that eludes most tourists. He plans to interview fishing guides, historians and other local experts for a plot line that takes place on the Maine coast. It’s part of the immersion-style research for which he’s become known.

“I found a way to be a perpetual child and come up with uses for hiking, caving, camping, fishing – and claiming that they’re research,” said the one-time journalist and private investigator. “It’s worked out really well for me.”

Koryta’s latest thriller, “Rise the Dark,” hits bookstores Tuesday. The author spoke recently from the midcoast about his literary idols, the craft of writing, his playlist and his cat, Marlowe. This interview has been edited for length and clarity.

Q: Your books are very good at scaring readers and keeping them on edge. What scares you?

A: Oh, so many things. That’s a fun thing about the books: I get to take all of my own fears and transport them to other people. I love that Gothic sense that the past is always affecting the present. I’m fascinated with the idea of the day you make a left turn that redirects things, when you could just as easily have made a right turn.

Q: What is the difference between the category of suspense versus thrillers, or is that just a marketing term?

A: To me, that’s more of a marketing term. There are lots of sub-genres. I think of suspense as sort of the big house, and there are different rooms in the house. There’s the ghost story room, the detective novel room, the chase-thriller room and the family drama room. I’ve done all of them. To me, they all seem to follow within the same general working territory.

I grew up reading mysteries. My dad was a huge film noir guy. I like not knowing what’s going to happen. I love the emotion of suspense.

Q: Critics have praised your work for its inventiveness and writing style.

A: From a very early age, I was brought up on Strunk and White (“The Elements of Style”) and William Zinsser, and the idea that every word counts. You could have a great story, but if you are not paying attention to the craft and language, you’re going to under-deliver on it. I had a chance to work with some really great writing teachers. Putting together a nice sentence – that’s the thing that hopefully elevates the story. I’m a fan of writers who care about craft as much as they care about story.

Q: Safe to assume that you’re a Stephen King fan?

A: Yes, absolutely. In fact, his book, “On Writing,” came out when I was 18, and that was a defining point for me. I had always wanted to be a writer, but that was the book that really made it feel possible.

Q: It seems that King has been penalized, in a sense, for being so prolific. What is that stigma, and have you encountered it?

A: Yes, it’s definitely around, and I’ve encountered it. It’s always amused me because, in many professions, if you do consistent work, you’re praised for work ethic and effort. But if you’re in the arts, the idea of putting out consistent work is viewed almost with skepticism. “Oh, it can’t be that good.” Or: “He can’t care that much.” There’s nothing that you, as a writer, can do about that.

I write because I love it. It’s not as if being prolific is really a choice so much as I have a lot of stories that I want to tell, and time is finite. I’d rather not waste it.

Q: Given your level of productivity, writing roughly a book a year, you must have near-military discipline.

A: I think that’s the thing that comes with wanting to be better. I spend a lot of time trying to measure up to the writers I consider really great in terms of language and getting things across with clarity, originality and economy. There’s a level of insecurity, where I’m never pleased with a book when it’s first published; I need a couple of years of remove to really enjoy it. But I’m always over-the-moon excited about what I’m working on.

Q: Who are the writers you’re competing with mentally, who set the gold standard for you?

A: Daniel Woodrell of “Winter’s Bone,” Dennis Lehane, Stephen King. There’s a fearlessness to Pat Conroy. He did not shy away from melodrama or big moments of emotion. I don’t distinguish in the least between writers in the genre and writers outside. The most dangerous thing a writer can do is read only in his or her genre. Rule No. 1 is read widely.

Q: Tell me about your writing routine.

A: When I’m working on a new book, I try to do a minimum of 1,500 words a day. I never outline a book. I feel like the first draft is where I’m sort of interviewing the characters and getting a rough sense of the story. In the rewriting, I have the chance to actually tell that story well; the rewriting is where I discover the book. It’s a messy process, but I honestly think I have more joy in that process than if I had an outline where I was just writing to get from A to B to C.

Q: In your Maine office, what are the essential ingredients?

A: I have to have music. I have a playlist that feeds the story. So I try to build soundtracks around the characters’ different moods – that’s a critical ingredient. I always want a nice view, but then, when the writing is going well, I realize that I never really look up, anyhow. Also, I drink an enormous amount of iced tea – that’s my go-to fuel during the day.

But the key ingredient is a stray cat that I took in the year that my first book was published. He has lived in my office in Indiana, Florida, Maine. His name is Marlowe, as in Detective Philip Marlowe. He’ll jump up on the desk and howl in my ear. He lets me know that I’m not working hard enough.

Q: How does Maine factor in to your next book?

A: I have characters in the next book who are lifelong Mainers. To write about a place, you really need to spend some time in the place and talk to people who are experts at what they do. I’ve been coming up here for seven or eight years. But I’ve only been here for a few weeks at a time, so I really only have a tourist’s sense of the state.

Again, all of this is sort of an excuse for me to have fun. What I loved most about being a journalist was talking to people, hearing stories that might be overlooked otherwise. That’s really where I draw a lot of inspiration. I always go back to that reporter’s instinct.

Q: No doubt, you’ve learned the difference between real Mainers and people “from away.”

A: I have to continually point to my wife: “No, no, she’s a fifth-generation Mainer!” Now that we’ve leased this place for the year, I’m really hoping to be here all summer. There’s something about Maine that seems to feed readers and writers. And I’m actually eager to spend as much of the winter as possible up here.

Q: Have you been warned about winter in Maine?

A: That’s why I think I need to spend time here!