Writing’s Not Such a Silent Art After All

Michael talks to Audible about the sound on the page with writers like Michael Connelly Books, Stephen King, Alafair Burke, Dean Koontz, and Megan Abbott Books.

The Voices Tell Me What To Do 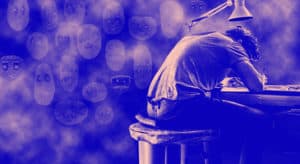 This is about the voices in my head. It’s not a manifesto, I promise. I hope that it will never be used against me in a court of law, and I’ve made my wife sign paperwork promising not to use it to have me committed. In an attempt to validate this confession, I’ve even sought witnesses who will testify that they, too, have voices in their heads — and some of them say very bad things.
I love listening to a well-read audiobook, and I’ve had the good fortune to have my own work read by two great narrators, Scott Brick and Robert Petkoff. Robert was honored with an Audie Award for his reading of my novel, Those Who Wish Me Dead, and they sent me a duplicate of the award, which was nice but also amusing to me — because if the audiobook had been offered in my own voice, it would have been useful only as a torture tactic. What skilled narrators do with the words on the page is humbling and inspiring.

But it’s also nothing like what I’ve heard in my head for the many months along the way to publication.

By the time I’m done with a book, I’m really hearing the characters and am deeply familiar with their individual voices.

This is not a criticism of the narrators, who make the books infinitely better than I deserve, but rather just an explanation that, by the time I’m done with a book, I’m really hearing the characters and am deeply familiar with their individual voices. This involves more than accent or affect; it’s about rhythm, how quickly they speak, when they pause, if they linger on a word or hit it harshly.

Mind you, I can’t replicate this aloud, myself. When I give public readings, I don’t strive for any real change of my own voice because I simply lack that skill. It’s one thing to hear the way a voice sounds in your head and another to convey that, and this is what separates most writers from being able to do their own audiobooks. (Although there are certainly exceptions — if you want to hear the best of both worlds, listen to Terry McMillan on audio.)

The only thing I can do to help the performance when I read aloud is to put the brakes on in the right places, enunciate it in the way I’ve heard it in my head, or maybe hit a word harder than the text would seem to suggest. Of course, then I’ll listen to Petkoff and think, “Okay, he fixed that portion for me, and he sure gives that paragraph a flow that it doesn’t have on the page.”

While [the audiobook is] still your story, it’s a different, enhanced version of that story.

Listening to a great narration performance is kind of like watching a movie adapted from a book you loved — I never would have thought to cast her in that role, but she’s fantastic. The adaptation comparison might seem over-the-top, but I really don’t think it is, because an audiobook, like a movie, is an entirely different medium. You need people to bring certain gifts toward that medium, and while it’s still your story, it’s a different, enhanced version of that story.

Rhythm and cadence are among the most important elements of that thing we generally call a writer’s “voice.” Ben Yagoda wrote a really interesting book on this topic called The Sound on the Page. We read with our eyes, but also our ears. It’s largely an auditory experience. Dean Koontz told me that he not only “hears” distinct voices when he’s writing dialogue, but that he will “laugh out loud when a character says something funny and hiss ‘Yesssss’ when he or she says something either poignant or kick-ass.”

He captures perfectly the odd sense of being more on the transcription side of things than the authorial. I know the writing is truly going well in the moments when I don’t feel anything close to creative; rather, I feel as if I’m just trying to keep up with the voices. That’s also when it’s the most fun, by far.

Now comes another confession: I’ll speak while I write, without intending to. Not all the time, but often enough. And far more often than I speak aloud, I’ll catch myself mouthing the words.

If people watched me write, I think they’d feel like they should be on the other side of bulletproof glass.

In his book On Writing, Stephen King counsels to “write with the door closed.” He’s referring to avoiding feedback on first drafts, but in my personal case, it’s also prudent advice for maintaining any social ties in the world. If people watched me write, I think they’d feel like they should be on the other side of bulletproof glass. My lips move in the way a child’s might when he’s learning to read — sounding things out, quite literally. And that’s because there is a unique sound to it, and — particularly with dialogue — I need to know how it feels to say the words. It’s not a conscious thing, not a plan, just something I catch myself doing. It happens most often when I’m first meeting a character and learning who they are and how they talk, and then again in revisions, when I’m honing a sentence.

I’ve been curious what the experience of other writers has been with this, and so I sent out a few inquiries, asking people if they ever catch themselves speaking or mouthing the words that they write. Here are some of the responses I received:

Michael Connelly: “I do this all the time. I say dialogue out loud when I’m writing just so I know it sounds like something someone would say instead of write. I don’t do this with all dialogue, just those lines where that question comes to mind: Was this written or was this said?”

Dean Koontz: “I don’t move my lips silently while writing dialogue, but when, for one or another reason, there needs to be a certain rhythm to what a character says, I whisper the dialogue to get a sense of whether the beats are falling where I want them. I don’t speak it fully out loud, because I’m a rotten actor, and I’d give it such a ludicrous reading that I’d spoil the mood.”

Alafair Burke: “I know it sounds crazy, but dialogue plays in my ear as if I’m monitoring a wiretap. Even in the first draft phase, I know I’m in the zone when I find myself mouthing words as I write them on the page.”

Stephen King: “When I’m not sure, I always read it aloud. Again and again, until it’s right. ‘Easy reading comes from hard writing.’”

Megan Abbott: “I rely on sound heavily. I tend to rewrite and rewrite until what’s on the page ‘sounds’ like the, er, voices in my head. I always want the experience of reading my books to feel like the main character is whispering in the reader’s ear, and so that does lead to all kinds of crazy behavior while writing it. So you are not alone.”

(Bless you, Megan. You will be Character Witness #1 in my defense.)

In discussing this with other writers, it seems that many of them will pause to read aloud during revision. Some authors will read the entire work aloud as they go through copy edits. I know one writer who will even read his book into a recorder and then play it back just so he can be more objective about the cadence and pacing. That seems like a great idea to me, a total immersion in craft, the ultimate example of Strunk and White’s “every word counts” mantra, but whenever I’ve tried to read prolonged portions aloud the characters begin to fade on me, and then I’m only hearing myself (perhaps because, out loud, I can’t do the voices justice).

The responses on this topic seemed a little like discussing outlining — every writer has a different philosophy, and they’re wedded to what has worked for them. Alafair Burke said, “Before I let a manuscript go into production, I read the entire book aloud. I advise my law school students to read their memos and briefs aloud to find the clunky spots.” Megan Abbott said she knows several writers who do this but that she can’t, that it’s a “bridge too far” for her and that she is most likely to read aloud “when I’m revising, trying to nail the rhythm of a voice.” Likewise, Stephen King said that he’ll read it aloud only when he’s not sure if he has things precisely right.

A highly individual habit, but a consistent one, those voices in the head. Duly reassuring for me. I’ll save my next confession for another time. For now, there’s no need for you to know that I also find myself talking out loud when I’m hiking. No reason to share that at all! Although in Ron Chernow’s biography of Alexander Hamilton, he mentions that “Hamilton’s lifelong habit of talking sotto voce while pacing lent him an air of either inspiration or madness.”

So, if I did do such a thing, at least I’d be in good company — squarely in that comfortable spot between inspiration or madness. Don’t lean too far …